Conquer and divide: how social media platforms flipped the strategy for profit 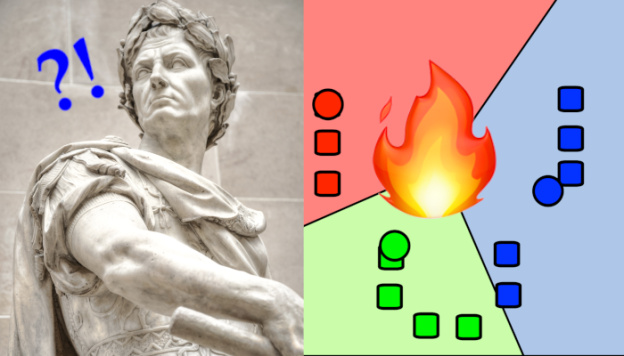 You surely have heard the phrase “divide and conquer” (or “divide and rule”). Divide and conquer comes from the latin words “divide et impera” attributed to Philip II of Macedon but famously used by Julius Caesar, who used them to describe his main war strategy. Julius Caesar was in fact a master in dividing and ruling and, despite how much good his conquests brought is questionable, the ultimate goal was to unite all single states into one cohesive Republic.

The same words are also used today to describe a general problem solving strategy. In many disciplines, for example in computer science, this works as a coarse solution for all those problems that can be defined as separable, or, in other words, can be split into sub-problems whose solution can be later assembled into one that solves the bigger, undivided problem.

Thus, divide and conquer can have a positive meaning today, but what did Julius Caesar mean by it? Julius Caesar was considered a phenomenal strategist as he managed to build an exceptionally extended empire following a relatively simple principle: the smaller the number of defending people, the higher the chances of success of an attack; he would in fact move his armies to very specific positions that would prevent two or more villages to gather up or communicate; he would later submit all villages one by one. There’s surely a lot of death and sufference to put on the scale which makes us question Julius Caesar’s implementation of the divide and conquer method as we conceive it today. It would most definitely be questioned by all the villagers who had to pay the price.

So despite the positive meaning we often give to the sentence in the fields of business, programming, maths and so on, there are instances where the original, Caesarian (not to be confused with the medical term) rough meaning is more appropriate. Online social networks have been an unfortunate blatant example as they treated their users as Caesar treated those villagers. After all social networks, like Julius Caesar, deal with people, not problems and whilst dividing a problem to find its solution can only, in principle, be good, dividing people for profit is a totally different intention.

I think by now we all know that divisive practices have not only been largely applied by the most prominent social platforms, but they have also been incredibly successful. What is it that makes dividing people such an appealing strategy? It makes bucks. How? In bullet points:

But here’s the flip: social media strategy is not even “divide and conquer”. The big players of social networking all started small and people were swarming into them by their own will, none of the known platforms started from a divisive strategy, rather, quite the opposite as users had the feeling of reuniting, finding new friends, reaching out to an old classmate or a lost relative. The divisive moves came later and that’s why the new strategy can be called conquer and divide rather than divide and conquer. Gather a massive user base to later divide them and put one side against each other on every possible topic that can be polarized: race, gender, wages, social care, abortion, Brexit, lagalise marjuana, immigration, firearms ownership, Shakira’s bum, Justin Bieber’s car and so on, and on and on.

Flipping the “D” and the “C” results in “Conquer and Divide” which becomes an ill-intentioned exploitative strategy whose long term goal is a user base that’s divided into factions fighting each other.

In fact, whilst we all have our opinions we all seem to agree on the fact that people have never been more divided (the article is circumscribed to America but can certainly speak for the rest of the world) we can all pretty much agree that we reached points of global scale division that we never saw before. People though don’t seem to be much aware about why they are so divided.

To expand a bit on the divisiveness bucks makers list: division is tension and tension pays off because people, especially when outraged, spend more time talking, replying and doing what’s in their power to make their opinions prevail. Even more so if there’s a strong, easily identifiable counter part, an antagonist, a foe, and even more so if the participant knows that there’s a strong ally, a positive pole, the “good side” from his/her point of view. The more the two factions fight over a topic the more the platform of choice can show them ads and as long as they stay on such platform, their opinions can be driven towards what is more convenient for the platform’s profit.

Algorithms implement strategies, but to which solution do they converge? Is it “maximize people’s love for each other”? Is it “make people more erudite”? Is it “promote articles that make people think”? Or is it more like “maximise the time people spend on the platform” and “maximise profit”? Given that it IS more than reasonable that businesses act to optimize profits, we should start wondering where does this stop, where is the line of decency and how far have companies stepped over it.

Years and years of engineering perfected a machine whose goal parted ways from users' intents to silently turn into a cold, impersonal artefact programmed to gather and sell users' data, amplify polarizing topics to a flaming point by driving opinions to one of two poles, lock the users in by using psychological tricks (see Facebook apologises for psychological experiments on users and How Facebook Stole Your Psychological Profile) and even change your opinion about an issue. We have seen it with election campaign scandals (Cambrige Analytica) and we keep seeing across all possible topics.

It’s now in the open. All most popular social media platforms were found to have implemented such strategies to some extent and yet most of us just don’t mind and keep debating and spending hours scrolling down, staying hooked to these time grinders, turning from users to ‘useds’.

On a personal note, I do use social networks and admittedly I fell many times into the grinder so I am not exempt from having spat rants around in a polarized way. Nonetheless, with experience, as the firms' algorithms evolved to eat my time and data, I refined my own avoidance strategies. I learnt that if I feel enraged about something it’s likely better if I scroll past and get on with the good things I’m doing in life. Surely I want to know what goes on in the world but I lost my interest to even try to depolarize someone or enforce an opinion of one side of an opinion war. I can still have friendly discussions about the same topic and I am aware that the media does not encourage this in any way.

In my opinion those who do participate often in online debates should consider that the person they are enraged against online is more likely than they think to be a good friend of theirs in real life. And, let’s not be naive, by contrast, the person they think to be a good ally may be a despicable bully in real life. The polarized version they know through the lens of media isn’t the full reality and we all seem to have lost this vision.

Ultimately we all should spend less time online and live more with what happens around us. Online presence isn’t the present.

Cookie consent
This website does not store your data but makes essential use of http cookies, which help us to improve our site and enables us to deliver the best possible service and customer experience
Leave